Coronavirus outbreak 'getting bigger', says WHO, warning of spread worldwide 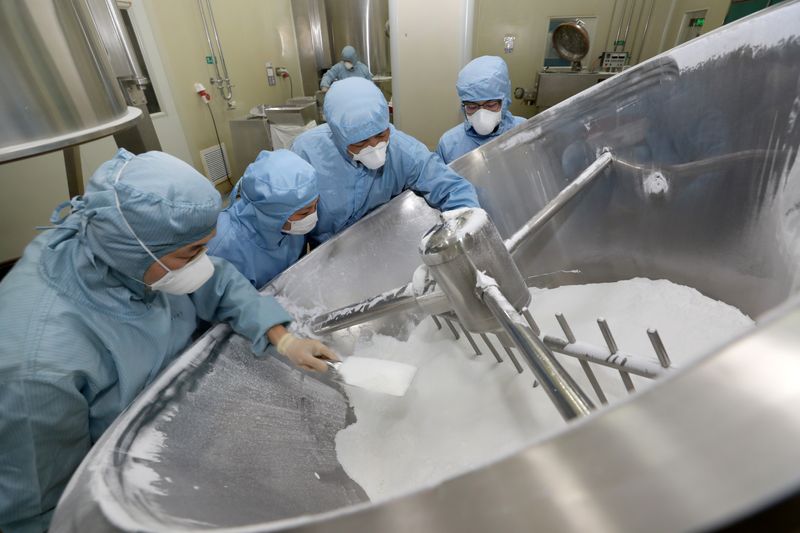 © Reuters. Employees work on the production line of an antimalarial drug that Chinese officials said has curative effect on the novel coronavirus disease, at a pharmaceutical company in Nantong

By Stephanie Nebehay and Ryan Woo

GENEVA/BEIJING (Reuters) - The rapid rise in coronavirus raised fears of a pandemic on Friday, with five countries reporting their first cases, the World Health Organization warning it could spread worldwide and Switzerland cancelling the giant Geneva car show.

World share markets crashed again, winding up their worst week since the 2008 global financial crisis and bringing the global wipeout to $5 trillion.

Hopes that the epidemic that started in China late last year would be over in months, and that economic activity would quickly return to normal, have been shattered as the number of international cases has spiraled.

"The outbreak is getting bigger," WHO spokesman Christian Lindmeier told reporters in Geneva.

"The scenario of the coronavirus reaching multiple countries, if not all countries around the world, is something we have been looking at and warning against since quite a while."

Switzerland joined countries banning big events to try to curb the epidemic, forcing cancellation of next week's Geneva international car show, one of the industry's most important gatherings.

The United States asked its military in Saudi Arabia to avoid crowded venues including malls and cinemas.

But as the outbreak eases in China, it is surging elsewhere.

Five more countries have reported their first case, all with travel history connected to Italy. They were Nigeria, Estonia, Denmark, Netherlands and Lithuania, Lindmeier said.

Countries other than China now account for about three-quarters of new infections.

Bulgaria said it was ready to deploy up to 1,000 troops and military equipment to the border with neighboring Turkey to prevent illegal migrant inflows. It said it would not allow massive inflows at a time when it is stepping up preventive measures against the coronavirus. It has not reported any cases.

Ratings agency Moody's said a pandemic - usually taken to mean a disease spreading quickly in different places - would trigger global and U.S. recessions in the first half of the year.

Mongolia, which has yet to confirm a case, placed its president, Battulga Khaltmaa, in quarantine as a precaution after he returned from a trip to China, state media reported.

A Chinese official called the epidemic the most difficult health crisis in the country's modern history. Another said some recovered patients had been found to be infectious, suggesting the epidemic may be even harder to eradicate than previously thought.

Lindmeier said the WHO was looking very carefully into reports of some people getting re-infected.

In Europe, France's reported cases doubled, Germany warned of an impending epidemic and Greece, a gateway for refugees from the Middle East, announced tighter border controls.

The death toll in Italy, Europe's worst-hit country, rose to 17 and those testing positive increased by more than 200 to 655.

Germany has nearly 60 cases, France about 38 and Spain 23, according to a Reuters count.

Iran, Italy and South Korea were at a "decisive point" in efforts to prevent a wider outbreak, the WHO said.

South Korea has the most cases outside China. It reported 571 new infections on Friday, bringing the total to 2,337. The outbreak, which has killed 13 people in South Korea, has also dented President Moon Jae-in's popularity, a poll showed.

The head of the WHO's emergency program, Dr Mike Ryan, said Iran's outbreak may be worse than realized. It has reported the most deaths outside China - 34 from 388 reported cases.

U.S. intelligence agencies are monitoring the spread of coronavirus in Iran and India, where only a handful of cases have been reported, sources said.

Japan is scheduled to host the 2020 Olympics in July but Ryan said discussions were being held about whether to go ahead.

Organizers will decide next week on the ceremonial torch relay, due to arrive on March 20 for a 121-day journey past landmarks including Mount Fuji and Hiroshima’s Peace Memorial Park.

As of Friday, confirmed cases in Japan had risen above 200, with four deaths, excluding more than 700 cases on a quarantined cruise liner, Diamond Princess.

A British man who was infected on the ship had died, bringing the death toll among passenger to six, Kyodo newswire reported.

Prime Minister Shinzo Abe had called for schools to close and vowed to prevent a severe blow to an economy already teetering on the brink of recession.

Chinese-ruled Hong Kong, where the coronavirus has killed two people and infected more than 90, quarantined a pet dog of a coronavirus patient after its nasal and oral samples tested "weak positive", though authorities had no evidence the virus can be transmitted to pets.

Replace the attached chart with a new chart ?
Replace Cancel
1000
Comment Guidelines
Your ability to comment is currently suspended due to negative user reports. Your status will be reviewed by our moderators.
Please wait a minute before you try to comment again.
Thanks for your comment. Please note that all comments are pending until approved by our moderators. It may therefore take some time before it appears on our website.
Comments (11)

John Taylor Feb 28, 2020 12:52PM ET
Share
Follow this post
Unfollow this post
Save
Saved. See Saved Items.
This comment has already been saved in your Saved Items
Block User
Google "Dean Koontz - The Eyes of Darkness". His 1981 novel is about a virus called Wuhan-400 that was manufactured in Wuhan, China, which he describes as the perfect weapon...
Reply
1 1
Report

Jérémie Ponseel Feb 28, 2020 8:55AM ET
Share
Follow this post
Unfollow this post
Save
Saved. See Saved Items.
This comment has already been saved in your Saved Items
Block User
Inl don t understand is this a pandemic virus or not? They say it has the potential but it s aready in 50 countries. I mean it takes 14 days to ahow sign apparently so 82000 cases known ok but what s the real impact. 700M chinese in quaranteen? Sounds like armagedon to me!
Reply
2 6
Report

James Marshall Feb 28, 2020 5:40AM ET
Share
Follow this post
Unfollow this post
Save
Saved. See Saved Items.
This comment has already been saved in your Saved Items
Block User
the Federal Reserve did this by creating a bubble. Corona impacts are nothing compared to a bubble popping.
Reply
8 5
Report

Gary Smith Feb 28, 2020 4:10AM ET
Share
Follow this post
Unfollow this post
Save
Saved. See Saved Items.
This comment has already been saved in your Saved Items
Block User
I wonder how many people who decided "stocks were on sale" are still thinking this. Oh yeah, stocks on sale based on their pre-virus earnings....LOL.
Reply
1 3
Report

Bronson Naab Feb 28, 2020 12:08AM ET
Share
Follow this post
Unfollow this post
Save
Saved. See Saved Items.
This comment has already been saved in your Saved Items
Block User
Think if America had a real leader...we would have taken charge of the global sitiation weeks ago. Instead we are understaffed, underprepared and the guy designated to lead us (and censor professionals) literally doesnt believe in science and claims smoking doesnt ****people.
Reply
8 23
Report

Rick Roland Feb 28, 2020 12:08AM ET
Share
Follow this post
Unfollow this post
Save
Saved. See Saved Items.
This comment has already been saved in your Saved Items
Block User
Sorry, but you are ignorant of what the US could have done in terms of "taking charge of the global situation."  Should we have gone into China and commandeered their health system? The world consists of sovereign nations.  Not to mention your ignorant propaganda inspired by the TDS virus you obviuously are suffereing from.
Reply
18 1
Report

Gary Smith Feb 28, 2020 12:08AM ET
Share
Follow this post
Unfollow this post
Save
Saved. See Saved Items.
This comment has already been saved in your Saved Items
Block User
It's not up to America ot take charge at a global level. Each country has their own responsibility. In fact, America should just worry about America at the moment.
Reply
6 0
Report

Jose Calles Feb 27, 2020 10:48PM ET
Share
Follow this post
Unfollow this post
Save
Saved. See Saved Items.
This comment has already been saved in your Saved Items
Block User
The virus is spreading in airplanes, the people must use face mask while traveling
Reply
3 3
Report

tsakaln1 . Feb 27, 2020 10:30PM ET
Share
Follow this post
Unfollow this post
Save
Saved. See Saved Items.
This comment has already been saved in your Saved Items
Block User
Discusting food choice that will cost world economy trillions of dollars, ***tens of thousands. By them all steak dinners for life would have been less costly to us all. Maybe the communist arm of China can lend a hand to their capitalism arm by feeding these people what we eat in the Western world. The worst you can get is clogged arteries if you over do it.
Reply
0 0
Report

Jeff Chevalier Feb 27, 2020 10:30PM ET
Share
Follow this post
Unfollow this post
Save
Saved. See Saved Items.
This comment has already been saved in your Saved Items
Block User
People all over the southern US eat rattle snake. So...... you're an ijit.
Reply
0 0
Report

3 Chipmakers Set To Emerge As Winners From The Coronavirus Wreckage By Jesse Cohen/Investing.com - Apr 01, 2020 12
More Analysis
Continue with Facebook
Continue with Google
or
Sign up with Email