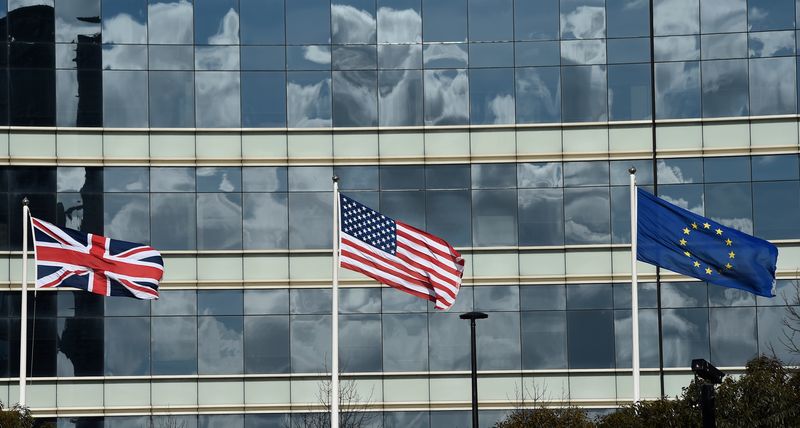 © Reuters. A British Union flag, a U.S. flag and an European Union flag are seen flying above offices in London, Britain

WASHINGTON (Reuters) - The Trump administration on Friday said it would focus on concluding new trade agreements with Britain, the European Union and Kenya over the coming year, while strictly enforcing trade laws and pushing for reforms of the World Trade Organization.

In its annual report to the U.S. Congress, the U.S. Trade Representative's office said members of the global trade body needed to fundamentally rethink what it called "an outdated tariff framework" that no longer reflected economic realities.

USTR delivered a scathing indictment of the WTO in the 338-page document, calling it an organization that had "strayed far from its original mission and purpose," while highlighting the Trump administration's push over the past year to confront what it said were China's unfair trade policies and practices.

It said 2019 was "a historic year for American trade" in which the administration reached trade agreements with China and Japan, and secured congressional approval of a new North American trade deal with Mexico and Canada.

It also hailed a WTO decision giving Washington the right to impose tariffs on $7.5 billion of EU goods in a long-running dispute over aircraft subsidies to Airbus (PA:AIR).

The U.S. government also initiated action against France over its digital services taxes that Washington says will harm U.S. tech companies such as Facebook (O:FB), Alphabet Inc's Google (O:GOOGL), Amazon Inc (O:AMZN) and Apple (O:AAPL), and is monitoring developments in other countries, the report said.

Washington and Paris have agreed to a truce staving off those tariffs through year-end to allow work on broader tax reforms by the Organization for Economic Cooperation and Development.

"Going forward, President Trump will continue to rebalance America’s relationship with its trading partners, aggressively enforce our trade laws, and take prompt action in response to unfair trade practices by other nations," the report said.

USTR said it hoped a recent change in EU leadership and appointment of a new trade commissioner would lead to "more progress in the coming year" than was possible in the past.

It said it also planned to conduct further negotiations with Japan and China to reach more comprehensive trade agreements, while continuing to push for reforms at the WTO.

"The WTO's failure to keep pace with new developments in the global economy has resulted in significant advantages for non-market economies," USTR wrote in the report, saying China in particular benefited from the WTO's deficiencies.