EconomyFeb 28, 2020 11:28AM ET
Saved. See Saved Items.
This article has already been saved in your Saved Items 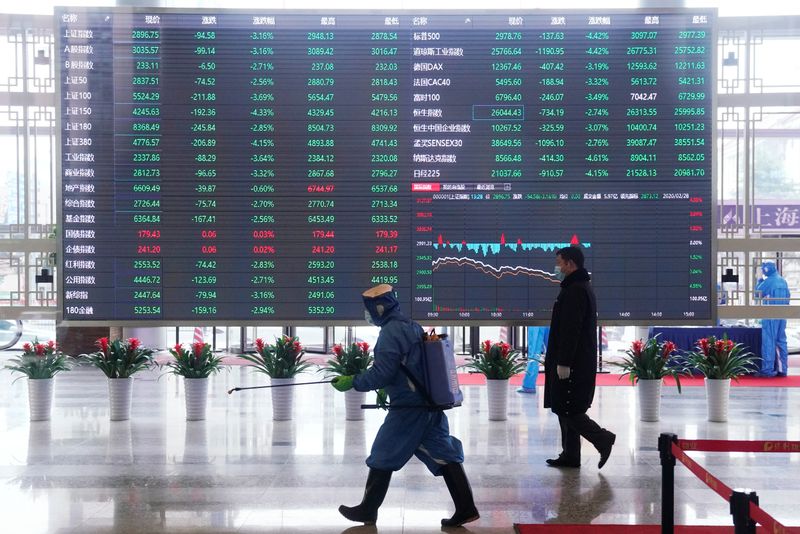 We'll soon get the first proper glimpse at the economic damage the coronavirus is inflicting. China's official Purchasing Managers' Index is due on Saturday, and is expected to show the sharpest manufacturing contraction since the 2008 global financial crisis.

Then comes Korean trade data on Sunday, followed by regional PMIs on Monday, Malaysia's January export stats on Tuesday and those from Australia on Wednesday. Just as infection figures have guided guesswork around the scale of human loss and the length of the disruption, the data will help with the first real estimation of its depth.

What it won't show are the multiplier effects of chaos and fear in a globalized world. What about the supply chain disruptions, such as the weeks-long idling of Chinese plants belonging to the world's biggest ball bearings maker?

On top of that, collapsing confidence, layoffs or even reduced working hours - hitting both output and demand - and a credit crunch are adding to the woes and raising the prospect of a more profound shock as markets scramble to find out how bad the damage is in the data fog.

2/GET OFF THAT BRAKE

As the virus grips markets and recession risks flash amber, the focus turns to damage limitation plans. So any signals from powerhouse Germany that it is willing to suspend its debt brake - a strict rule on the amount of debt it can raise - and increase spending will be watched closely.

But now Germany faces pressure to do more, especially given the European Central Bank is near the limits of what it can achieve.

With money markets pricing in an ECB rate cut as early as June, German savers' exasperation over negative rates will grow. They, of course, could well join the clamor for more German spending - one thing economists say may help stem the tide of negative rates.

With crude oil prices down 25% since the start of 2020, there is no shortage of topics to discuss when members of the Organization of the Petroleum Exporting Countries and its allies including Russia - known as OPEC+ - meet in Vienna on Thursday and Friday.

The group has already slashed oil output by 1.7 million bpd under a deal that runs to the end of March. In an initial response to counter the hit of the virus, an OPEC+ committee has recommended deepening output cuts by 600,000 bpd. But that figure is now seen as not enough by some in the group.

Saudi Arabia, the biggest OPEC producer, and some other members are considering an output cut of 1 million barrels per day for the second quarter of 2020, according to sources.

Newly divorced Britain and the European Union kick off negotiations for a trade deal on Monday, sounding the starting gun on a process due to be wrapped up by Dec. 31.

The mood music in the run-up to the talks suggests a rocky ride as Brussels and London try to hammer out agreements on everything from fishing to transport to replace more than 40 years of closely aligned relations following Britain's exit from the EU on Jan. 31.

The British government has threatened to walk away from the talks if "good progress" was not made by June. France's European Affairs Minister said the EU would not accept "artificial deadlines" in the talks, urging London to be led by reason in the negotiations.

With coronavirus panic dominating world markets, the launch of the talks may seem somewhat of a sideshow. But expect the start of the negotiations to set the tone for the 10 months of talks, which if inconclusive come end-2020, could see Britain and the EU face a "hard Brexit". Sterling shed 2.1% of its value versus the euro (EURGBP=D3) this week, partly as the rhetoric from both sides hardened.

The race for the Democratic U.S. presidential nomination heats up in the days to come and the results could divert some attention from the spread of the coronavirus. South Carolina's primary election provides the appetizer on Saturday before 14 states go to the polls on Super Tuesday - the largest single-day delegate haul in the nomination fight.

Investors will be looking to see whether progressive Senator Bernie Sanders consolidates his lead or if moderates such as former Vice President Joe Biden or former New York Mayor Michael Bloomberg can make inroads. While investors have been more consumed by the coronavirus developments, election-related headlines have jostled some parts of the market.

Shares of U.S. health insurers such as UnitedHealth Group (N:UNH), for example, have in recent months been vulnerable to the rising prospects of Sanders and fellow candidate Elizabeth Warren.