EconomyFeb 28, 2020 03:38AM ET
Saved. See Saved Items.
This article has already been saved in your Saved Items 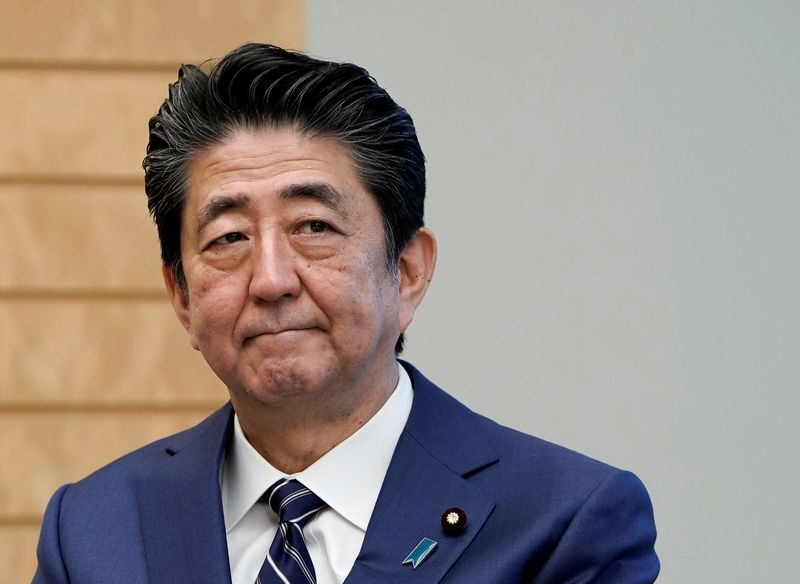 TOKYO (Reuters) - Japanese Prime Minister Shinzo Abe vowed to take whatever policy steps are needed to prevent the new coronavirus from dealing a severe blow to an economy already teetering on the brink of recession.

With investors fearful of a worldwide downturn, global shares on Friday were heading for their biggest weekly fall since the depths of the financial crisis in 2008, putting policymakers under pressure to take bolder action.

Abe said the government had sufficient reserves to tap for emergency spending related to the epidemic, signaling he saw no immediate need to compile a fresh spending package.

"But I'm aware of views that if the virus spreads, it could have a huge impact on the economy," Abe told parliament on Friday. "We're therefore watching developments carefully."

"If developments change, we'll ensure to take steps as needed to prevent the virus from becoming a huge downside risk to Japan's economy," he said.

Tokyo's benchmark Nikkei average (N225), seen by Abe's administration as a barometer of success of its "Abenomics" stimulus policies, closed down 3.67% on Friday.

The yen hit a one-month high against the dollar as investors flocked to the Japanese currency as a beacon of safety. A rising yen is an unwelcome move for the Bank of Japan worried it could undermine the export-reliant economy.

A senior Japanese finance ministry official said on Friday that market movements were reflecting the "shock" from the spreading of the virus, but refrained from commenting on specific market moves.

Japan's economy shrank at its fastest pace in nearly six years in the December quarter, as weak global demand and a domestic increase in a sales tax hurt consumption and business spending.

Some analysts expect the economy to shrink again in the current quarter and slip into recession - defined as two straight quarters of contraction.

Ryutaro Kono, chief Japan economist at BNP Paribas (PA:BNPP), said GDP may fall in the current quarter at an annualized rate of more than 2% if economic conditions do not normalize by the end of March.

"We could see a huge slump in service-related consumption that we've never experienced before" after Abe asked companies to cancel events and shut down schools, Kono said.

The BOJ said on Friday a board member would postpone a scheduled visit to Fukushima in northeastern Japan next week - the first time the central bank has put off a public appearance by a policymaker since the virus hit Japan.

Japan's government compiled a fiscal spending package late last year to counter the impact of soft global demand. But some ruling party lawmakers are calling for fresh spending given the damage from the epidemic.

Having used up most of its ammunition, the BOJ appears reluctant to deploy additional stimulus - at least for now.

"I don't think the BOJ needs to take additional monetary easing steps now in response to the coronavirus outbreak," said Goushi Kataoka, one of the most dovish members of the BOJ board.

"We need to first look at how serious the impact from the outbreak would be," he told reporters on Thursday.

Week Ahead: Despite Equity Rebound, Bear Market And Volatility Will... By Pinchas Cohen/Investing.com - Mar 29, 2020 34

Gold Miners Better Than Gold By Fiona Cincotta - Mar 27, 2020 24
More Analysis
Continue with Facebook
Continue with Google
or
Sign up with Email