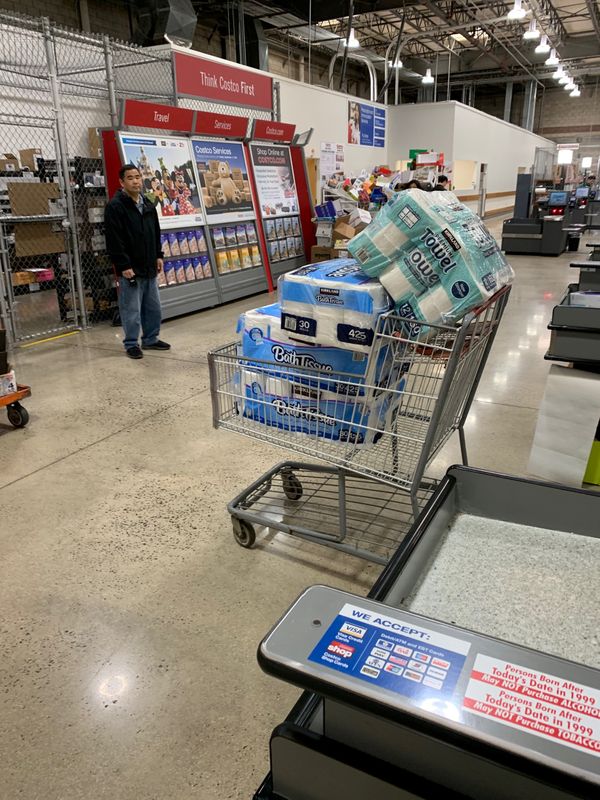 © Reuters. Shoppers in a Costco stock up on a 14-day supply of food, water and other necessities in Honolulu

By Brad Brooks and Andrew Hay

(Reuters) - American consumers awoke this week to the coronavirus threat and are beginning to display a symptom of the illness seen in Asia and Europe - hoarding.

Nothing in the United States yet resembles what Italy witnessed in recent days - where supermarket shelves were stripped bare and videos posted on social media showed consumers coming to blows over bags of pasta.

But there is unquestionably a growing sense of urgency for people to stock up on staples and to prepare for lengthy home quarantines.

"I'm buying some flu therapy and pain killers - If I wait until next week there may be nothing left," said Dean McKnight, a engineer in Austin, Texas, as he motioned to shelves at the HEB supermarket that were empty of several over-the-counter medications, primarily flu treatment for children.

McKnight worked in Hong Kong and China during the SARS outbreak and knows first-hand the stresses that snowballing fears of a pandemic can cause, but said he is not panicked.

"We got an extra month's worth of inhalers for my wife, but we're not stocking up on medications or food as if we expect to need to secure several months of supplies right now."

The coronavirus spread further globally on Friday. The latest World Health Organization figures indicate more than 82,000 people have been infected, with over 2,700 deaths in China and 57 deaths in 46 other countries.

Panic purchasing has been seen of masks and other personal protective gear. But there is also a looming threat to retail across the board, analysts said.

Several major retailers - including Walmart (NYSE:WMT) and Target (NYSE:TGT) - stand to see supply chains badly hit by the coronavirus and that could result in some empty store shelves starting in April, Ed Kelly, an analyst at Wells Fargo (NYSE:WFC) Securities, wrote in a research note this month.

"We believe the time to start worrying about the supply chain risk of 2019-nCoV is here," wrote Kelly. "It's worth noting that big box players like Target and Walmart could be the first to experience out of stock issues."

That is because those stores operate on a just-in-time inventory model, Kelly wrote, and are highly dependent on China, where supply chains have been badly disrupted.

'HARD TO KEEP UP'

Stockpiling in states like Hawaii and Minnesota was spurred by messages from state health departments urging residents to buy supplies of non-perishable foods, prescription medications and sanitary supplies.

The advice contradicted the message from the U.S. Centers for Disease Control and Prevention (CDC).

CDC Director Robert Redfield on Thursday told a U.S. congressional hearing that there was no need for healthy Americans to stock up on any supplies.

"We should have one unified message," said Robyn Gershon, a clinical professor of epidemiology at New York University. "When there's an absence of a good, strong and reassuring official voice, people will get more upset and start doing this magical thinking."

On Friday in Honolulu, Hawaii, retired telecommunications worker Duane Tanouye, 62, waited in line outside a Costco (NASDAQ:COST) with more than 200 other people.

Stores in Hawaii had begun limiting how much consumers could buy of some products, such as toilet paper, he said.

Pandemic shopping lists have been going around online, with virologist Ian Mackay suggesting people not forget treats like soft drinks and chocolate alongside the grains and pasta.

"But don't panic buy and don't hoard!" Mackay, an associate professor at the University of Queensland in Australia, said in his blog post, "So you think you're about to be in a pandemic?"

Minnesota's health department said buying supplies now would make it easier to stay at home if family members got sick, or if people wanted to avoid sick people in their community.

Hawaii told families to prepare as they did for hurricanes, with a 14-day supply of food, water and other necessities.

At Cid's Food Market, a natural food store in Taos, New Mexico, an area known for its off-the-grid communities, locals were filling shopping carts with sacks of rice, beans and oats.

"It's been hard to keep up this week, I'd say demand has at least doubled," said Steve Sutherland, bulk manager at Cid's. "People tend to stock up here anytime there is a problem."

Jason Robnett, a chef and jewelry designer from Taos, snagged the last 20-pound bag of pinto beans on the bulk department shelf as he was stocking up on items.

"People need to stop reacting, just stay still," he said. "If everybody just sits still until the readiness comes up to the right level, that's better than running willy-nilly in every direction."

Nick Gee Mar 01, 2020 7:26PM ET
Share
Follow this post
Unfollow this post
Save
Saved. See Saved Items.
This comment has already been saved in your Saved Items
Block User
Yes... just wait and sit still. Sit still til everything is gone. If they close fast food joints what will the lazy American do for food? Forage for food? In winter.... Stand in food lines with other sick people who no masks on? I already got my stuff. Good luck people.
Reply
0 0
Report

alex gallegos Feb 29, 2020 6:34AM ET
Share
Follow this post
Unfollow this post
Save
Saved. See Saved Items.
This comment has already been saved in your Saved Items
Block User
We are three meals away from seeing chaos in the streets.
Reply
0 0
Report