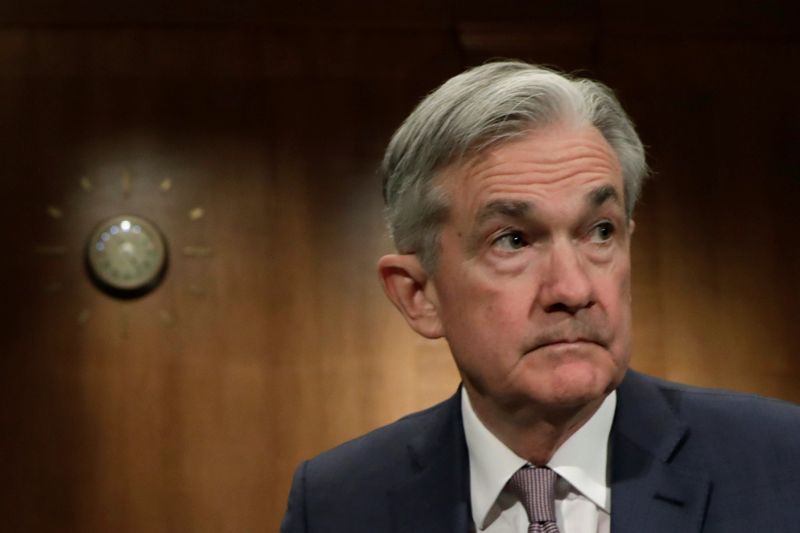 (Reuters) - Federal Reserve Chair Jerome Powell on Friday said the central bank will "act as appropriate" to support the economy in the face of risks posed by the coronavirus epidemic, though he said the economy remains in good shape overall.

"The fundamentals of the U.S. economy remain strong," Powell said in a statement released as stocks headed for their worst week since the financial crisis.

"However, the coronavirus poses evolving risks to economic activity. The Federal Reserve is closely monitoring developments and their implications for the economic outlook. We will use our tools and act as appropriate to support the economy."

The statement, flagging the Fed's willingness to move if the health emergency posed by the illness known as COVID-19 continues to spread and impact the economy, came in response to soaring expectations that the Fed will cut interest rates at its upcoming March meeting.

Stocks briefly pared losses after Powell's comments, and traders of interest-rate futures piled into bets the U.S. central bank will reduce interest rates by a half of a percentage point at its mid-March meeting, and another half a point by July.

Until the chair spoke, Fed officials largely focused on the fact that the virus outbreak had not seemed to dent U.S. economic data, and most signaled they expected the outbreak to be contained and any economic damage to be modest.

By Friday, however, investors were anticipating Fed action with such certainty it could prove hard for the central bank not to move for fear that disrupting those expectations would cause damage of its own.

Powell's pledge to "act as appropriate" echoes a phrase he first used in June 2019 in the face of what were at the time rising risks from trade policy uncertainty. The Fed skipped a rate cut in the meeting that took place two weeks later, but delivered a quarter-point reduction in July, and two more such cuts at subsequent meetings.

This time, in characterizing the virus as posing "evolving" risks and saying the Fed will use its tools to "support" the economy, the Fed chair appeared to leave open the door to potentially bigger and faster action, if needed.

That is how Fed funds futures traders appeared to take it. They are now pricing in more than an 80% chance of a new 1% to 1.25% Fed target range for short-term borrowing costs by March 18, when the Fed next meets, down from the current 1.5% to 1.75% range. Pricing also shows traders expect rates to drop to the 0.5% to 0.75% range by July.

Replace the attached chart with a new chart ?
Replace Cancel
1000
Comment Guidelines
Your ability to comment is currently suspended due to negative user reports. Your status will be reviewed by our moderators.
Please wait a minute before you try to comment again.
Thanks for your comment. Please note that all comments are pending until approved by our moderators. It may therefore take some time before it appears on our website.
Comments (4)

James Marshall Feb 29, 2020 5:45AM ET
Share
Follow this post
Unfollow this post
Save
Saved. See Saved Items.
This comment has already been saved in your Saved Items
Block User
anyone paying attention knows Powell us the reason the market went parabolic and crashed. they aren't here to help retail, only banks... get guess who got heavily short last week...Goldman, JP, and friends.
Reply
0 0
Report

Vincent Powell Feb 28, 2020 2:45PM ET
Share
Follow this post
Unfollow this post
Save
Saved. See Saved Items.
This comment has already been saved in your Saved Items
Block User
How the **** can an economy that is completely dependent on ultra low interest rates, and QE be in good shape
Reply
9 0
Report

Triplicis Mundi Summum Feb 28, 2020 2:45PM ET
Share
Follow this post
Unfollow this post
Save
Saved. See Saved Items.
This comment has already been saved in your Saved Items
Block User
It runs on Trumpower, that’s how. Smoke and mirrors, like every business he has ever run. Before people realize the jig is up, he has left with his money.
Reply
1 1
Report