Fed's Bullard: U.S. rate cuts 'a possibility' if coronavirus intensifies, not base case 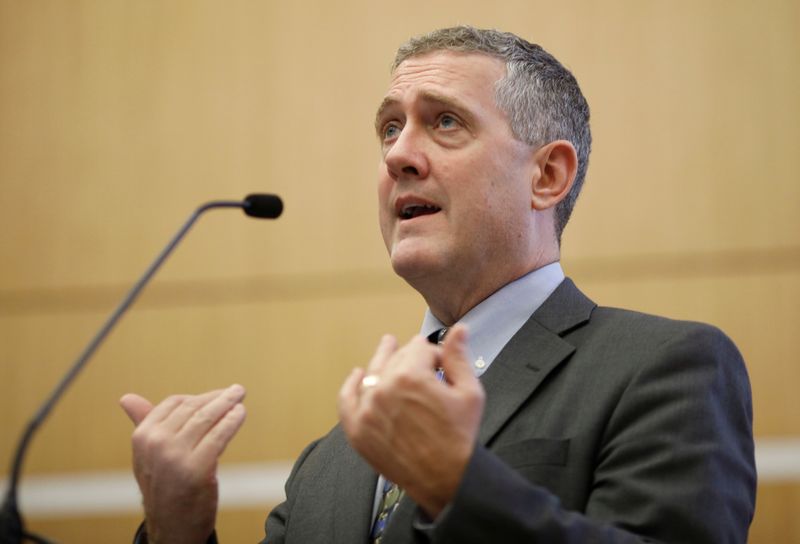 In the most explicit assessment yet from a U.S. central banker of how the epidemic is influencing thinking, Bullard said the expectation was for at most a small hit to U.S. growth, containment of the virus, and no need for the Fed to add more rate reductions to the three "insurance" cuts made last year.

In extensive remarks he acknowledged the "serious" downside risks if the virus does remain uncontained and death rates began approaching those of yearly flu outbreaks. But as a base case he pushed back against speculation the Fed might make emergency rate cuts before its March 17-18 meeting or that global central banks might coordinate a joint response. The dramatic market sell-off, he suggested, had gotten ahead of the likelihood the virus will be contained.

"We already lowered rates last year and that was billed as insurance against possible shocks and lo and behold we have a shock. We already took out the insurance,” Bullard told the Fort Smith Regional Chamber of Commerce.

Asked whether strong market expectations of a rate reduction as soon at the Fed's March 17-18 meeting would force the Fed to act, Bullard said: "No I don't."

Separately, Dallas Federal Reserve president Robert Kaplan said he will decide soon whether he thinks a rate cut is warranted. With the Fed's target policy rate currently set in a range of 1.5% to 1.75%, further reductions would push the central bank closer to the zero level it hit during the 2007 to 2009 crisis -- something policymakers would prefer to avoid.

With U.S. stocks crashing 15% in seven trading sessions, however, investors have cast aside all doubt the Fed will step in with rate cuts in just over two weeks' time. The question reflected in interest rate futures markets now is not whether a rate cut is coming on March 18, but how big it will be.

According to the CME's FedWatch Tool, it is a toss up between whether the Fed will cut a quarter percentage point or a half point. A week ago, rate futures reflected a nearly 90% probability the Fed would stick to its previous guidance and leave rates where they are absent a "material reassessment" of the economic outlook.

Some important indicators have slipped, mostly notably market expectations for inflation that have nosedived alongside equity markets.

Bullard has been sensitive to that, but said it was not clear to him the recent drop in market based inflation expectations reflected anything other than a temporary disruption.

"I would not want to prejudge the March meeting," Bullard said. "Obviously the situation is very fluid and we are going to want to monitor events right up until the meeting...You do have to worry about the tail risk," he said.

But "data suggest we are able to have a public health response globally that will bring the virus under control...The market pricing will reverse at that point...I am willing to react if that situation gets worse and there looks like there will be a major effect on the U.S. economy, and I think it would be an effective response. But we would have to get to that juncture."

Asked about the possibility of an emergency meeting to cut rates he noted the situation "could turn around very quickly" if the virus is controlled.

As it stands, Bullard said he expects the virus to run its course with only a temporary disruption to the world economy, and an economic impact centered in China.

Bullard does not vote on the Fed's interest rate policy panel this year, but his comments were the most detailed yet by a Fed policymaker about the set of risks that have driven global equity markets into a broad selloff.

His prepared speech here included a table noting that the coronavirus mortality rate was well below that of the seasonal influenza outbreaks that kill hundreds of thousands worldwide each year. By comparison only a few thousand deaths so far have been recorded from what health officials call COVID-19.

As it currently stands the Fed "is in a good position because of previous policy rate cuts designed to ensure the economy against adverse shocks," he said, referring to the central bank's three rate cuts last year and even sharper pivot away from what were expected at the start of 2019 to be continued rate increases.

Replace the attached chart with a new chart ?
Replace Cancel
1000
Comment Guidelines
Your ability to comment is currently suspended due to negative user reports. Your status will be reviewed by our moderators.
Please wait a minute before you try to comment again.
Thanks for your comment. Please note that all comments are pending until approved by our moderators. It may therefore take some time before it appears on our website.
Comments (4)

GamerTurtle Feb 29, 2020 9:09AM ET
Share
Follow this post
Unfollow this post
Save
Saved. See Saved Items.
This comment has already been saved in your Saved Items
Block User
how does rate cut resolve coronavirus? lmao. no one is going to borrow more cheap money to expand operation if everyone is on the risk on staying home due to life threatening virus. I am neither a economist or a doctor but common sense says fed rate and coronavirus has no relationship.
Reply
0 0
Report

Vita Pozdeyev Feb 28, 2020 10:29AM ET
Share
Follow this post
Unfollow this post
Save
Saved. See Saved Items.
This comment has already been saved in your Saved Items
Block User
Well, except the current death rate from all flu worldwide is around 1-1.4%. The Spanish influenza had a death rate of 1.9%. Coronavirus has a current death rate of 3.4%. And it is carried without symptoms for up to 14 days, and some are suggesting even longer. Corona virus, percentage wise is deadlier
Reply
0 4
Report

The Covenant Feb 28, 2020 10:29AM ET
Share
Follow this post
Unfollow this post
Save
Saved. See Saved Items.
This comment has already been saved in your Saved Items
Block User
Except that the ‚dark number‘ of infected is unknown and might be thousands of time higher than diagnosed ones. So the death rate will be lower.. I should know because im a doctor
Reply
2 0
Report