Explainer: How U.S. markets will function if coronavirus breaks out in NYC 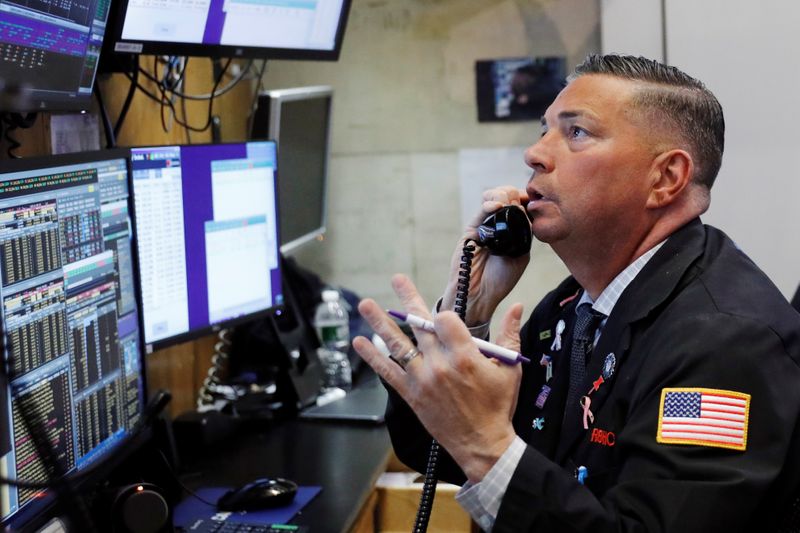 NEW YORK (Reuters) - If an outbreak of coronavirus hits New York, it could cause more sharp selling of stocks, but markets would likely continue to function even if the floor of the New York Stock Exchange had to close.

No case has been confirmed in the state, but dozens of people were being checked in the New York City area on Wednesday.

Here is how the markets would work if there were disruptions or panic selling of stocks.

HOW PREPARED ARE STOCK EXCHANGES?

Nearly all U.S. stock trading is done electronically, with only Intercontinental Exchange Inc's (N:ICE) NYSE still operating an open outcry trading floor. But even the Big Board can operate fully electronically if the floor needs to be shut.The exchanges said they are monitoring the situation.

"The NYSE is carefully monitoring the spread of COVID-19 and has robust contingency plans, tested regularly, to enable continuous operation of the NYSE exchanges should any facilities be impacted," a spokesman said in a statement.

"Cboe has business continuity plans in place for a wide variety of scenarios that could potentially impact operations," said a spokeswoman for rival exchange operator Cboe Global Markets (Z:CBOE). "We are closely monitoring developments related to coronavirus."

"The safety of Nasdaq employees, vendors, visitors is paramount. We continue to follow the updates and act and communicate accordingly," said a spokesman for Nasdaq Inc (O:NDAQ).

WHAT IF AN EXCHANGE GOES DOWN?

On July 8, 2015, a technical glitch forced the NYSE to suspend trading for several hours, but trading continued as normal on the other 10 U.S. stock exchanges operating at the time.

There are now 13 stock exchanges and another three expected to launch this year, as well as around 30 private stock trading venues run by broker dealers where trading can take place.

In August 2013, a technical problem froze trading in all Nasdaq-listed stocks for three hours, leading the U.S. Securities and Exchange Commission to call for a meeting of Wall Street executives to insure "continuous and orderly" functioning of the markets.

CAN THE ENTIRE MARKET BE SHUT DOWN?

On Oct. 29 and 30, 2012, markets were closed after Superstorm Sandy, the worst storm to hit New York City in nearly 75 years. The NYSE closed its trading floor due to unsafe conditions in lower Manhattan. The exchange had planned to go fully electronic, but with much of Wall Street unprepared for the transition and running on skeleton staffing, traders and regulators felt uncomfortable with the idea and it was shelved. There has been extensive testing since then.

The markets were also closed following the Sept. 11, 2001, terror attacks until Sept. 17 to avoid panic selling.

HOW LIKELY IS A MAJOR STOCK MARKET CRASH?

HOW HAVE THINGS CHANGED SINCE PAST ISSUES?

Technology has made it easier for people to work from home, said Doug Clark, a Toronto-based electronic trading executive who has worked for Virtu Financial, ITG, and BMO Capital Markets. Toronto was one of the first places to experience an outbreak of the SARS virus after it spread from China in 2003.

"We were all scrambling," he said. Traders had difficulty accessing all of their trading tools from home, he said, as did exchange executives.

VPN technology has improved greatly since then and working from home is not such a big issue anymore, he said.

The SEC also introduced a rule called Regulation Systems Compliance and Integrity in 2014 to hold exchanges to a higher level of emergency preparedness, and the bourses do regular testing of their backup facilities, said James Angel, a Georgetown University finance professor.

But testing has its limits.

"You can do all the testing you want, but you never know if it's really going to work until you run it for real," Angel said.

Explainer: How U.S. markets will function if coronavirus breaks out in NYC
3
Comments (3)
3

HJ Index Feb 28, 2020 10:57AM ET
Share
Follow this post
Unfollow this post
Save
Saved. See Saved Items.
This comment has already been saved in your Saved Items
Block User
well, i really think US market will be only one standing at the end. the virus is really helping trump to prove his points: closing boarder, get work back to US. no more globalizarion. trump will win 2020.
Reply
4 0
Report