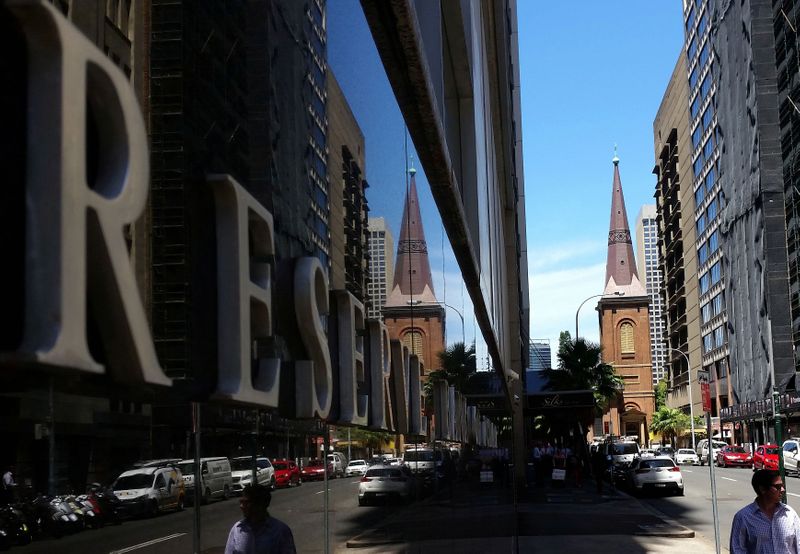 SYDNEY (Reuters) - Australia's central bank will hold its cash rate at record lows next week and cut twice later in the year, a Reuters poll showed, as a rapidly spreading coronavirus outbreak threatens to rock economies around the world.

A majority of the 35 respondents expect the Reserve Bank of Australia (RBA) to keep its benchmark rate at 0.75% at its March 3 policy review.

A second cut is seen by year-end, according to 18 of 35 respondents, as analysts brought forward their forecasts amid growing risks to global growth from the viral outbreak which has already jolted factory activity and tourism in a number of countries.

Economists say the hit to Australia's export industry from the coronavirus could be large given China is the country's largest trade partner by far.

Economists' predictions align with market pricing which shows little chance of a move in March. Futures are predicting rates at 0.5% by June while there is a 50-50 chance of a second cut to 0.25% by December.

Australia's A$2 trillion ($1.3 trillion) economy is in its 29th year of recession-free expansion, the longest boom among developed countries.

But economic risks have intensified as the country suffered one of its worst bushfire seasons on record this summer and is now grappling with the hit to its important tourism and education sectors from the coronavirus.

RBA Governor Philip Lowe has still held out the hope for the economy to keep growing and adding jobs which would eventually help lower the unemployment rate and lift inflation.

But analysts are not convinced.

"Investment expectations are at risk of potentially weakening should the COVID19 impact extend for longer," Citi economist Josh Williamson said, referring to the disease caused by the coronavirus.

"Our view is that the virus will produce a negative Q1 GDP result," he added.

"This reinforces our view of a May RBA rate cut with the risk that more will be need to be done if the virus impact extends further into the future."

Job Losses Soar And U.S. Dollar Follows: Here’s Why By Kathy Lien - Apr 03, 2020 33
More Analysis
Continue with Facebook
Continue with Google
or
Sign up with Email